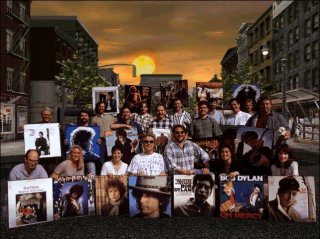 For regular mono albums, see here. Multi-packs with more than one regular album are listed here. Promo releases of regular albums are now listed on the appropriate album page. Note that some countries like the USA and UK have so many variations amongst 1960s Dylan albums that it is impossible for every combination to be listed on the mono and stereo album pages!

Multi-packs with more than one regular album are listed here.

*I've also included the two UK Greatest Hits releases from 1967 and 1971 here because they were also released in several other countries worldwide.

**Although 2010's Bob Dylan In Concert: Brandeis University 1963 is available in mono only, it's included here because it's listed on the Albums page of bobdylan.com

. The seven-track CD Bob Dylan In Concert: Brandeis University 1963 was originally given away as a bonus disc in a card sleeve with copies of The Bootleg Series Vol. 9 - The Witmark Demos and the 9CD set The Original Mono Recordings. It was released as a regular album as a CD in a jewel case and as an 180gm mono vinyl LP in Apr 2011 and is now on the Albums page of bobdylan.com

, which means all seven tracks have now ceased to be rarities and are listed on the Released Rarities page.

The Essential Bob Dylan (2000) was added to the Albums page of bobdylan.com

, which meant Things Have Changed from the 2000 Wonder Boys soundtrack (formerly R-0299) ceased to be a rarity. Items containing R-0299 but no other rarities have been moved to the appropriate page of International Stereo Releases.

The Best Of Bob Dylan (released in the USA and Japan in 2005) is also now on the Albums page of bobdylan.com

. This is not the same as the 1997 European release of the same name.

The 3CD retrospective set Dylan released on 1 Oct 2007 means the original out-take of Dignity from Oh Mercy that first appeared on the 1998 Touched By An Angel soundtrack album (formerly R-0273) has also ceased to be a rarity. Items containing R-0273 but no other rarities have been moved to the appropriate page of International Stereo Releases.

All the Bootleg Series releases from 1998 or after include former rarities that were listed on this web-site (see Released Rarities). Items containing released tracks but no other rarities have been moved to the appropriate page of International Stereo Releases.

Thanks to Derek Barker of "Isis" magazine for news that the next release of The Bootleg Series will be in Sep 2021, and will feature the long-awaited 1983 Infidels sessions. For some reason The Bootleg Series Vol. 15 - Travelin' Thru 1967-1969 from 2019m is still not listed on the Albums page of bobdylan.com

The Bootleg Series Vols. 1-3  [Rare and Unreleased] 1961-1991 (1991) was released before I created this web-site in 1998, so all the previously unreleased tracks in that release were never allocated R-numbers. Although this set is numbered Vols. 1-3 the three "Volumes" have never been available as separate releases.

Future Editions of "The Bootleg Series"

Also under consideration is a set of the Time Out Of Mind sessions in 1997 - some material was released on The Bootleg Series Vol. 8 - Tell Tale Signs in 2008, but many more takes from the sessions remain unreleased. Further off could be a live Bootleg Series set with recordings from the Never Ending Tour, which started in 1988 and was still going on until interrupted in 2020!

1986-88 sessions: Knocked out Loaded to Down In The Groove. This would include the known missing out-takes from Down In The Groove, such as Impossible Words This original material is actually far better than it's been given credit for.

Super Audio CD (SA-CD) is a high definition read-only optical disc format for audio storage, introduced in 1999. It was developed jointly by Sony and Philips Electronics, and was intended to be the successor to the Compact Disc (CD) format. The SA-CD format offers more audio channels (e.g. surround sound), a higher bit rate, and longer playing time than a conventional CD. SA-CDs are designed to be played on an SA-CD player; however, a hybrid SA-CD contains a Red Book Compact Disc Digital Audio (CDDA) layer which can be played on a standard CD player.

None of the three Dylan albums released in quadraphonic in the 1970s were released in 2003 with 5.1 surround sound. Two other albums originally listed for SA-CD releases in 2003 but not eventually released in that format were Time Out Of Mind and The Bootleg Series Vol. 4: Live 1966.

In 2011 Columbia missed out on having a 50th Anniversary Collection (also known as The Copyright Extension Collection) for 1961, which meant they had to experience the ignominy of seeing Bob's first album (which was recorded in 1961) go out of copyright and dozens of public domain versions of the album appear (see Questionable Releases of Official Dylan Albums and Singles). Since 2012 they've corrected this by releasing all the previously unreleased tracks including live recordings in 50th Anniversary Collections in very limited quantities.

Thanks to Andreas Volkert for the following explanation:

According to Directive 2011/77/EU of the European Parliament and of the Council of 27 September 2011 the situation in regard to phonograms/recordings* is as follows:

The European copyright law from 2011 protects recordings made in 1963 or later for 70 years, but only if the recordings are "lawfully published or lawfully communicated" to the public within 50 years after "fixation" (= recording date). If they are released within that period (the cut off date being Dec. 31) they are protected for 70 years from the date of release. This means that "The Complete Basement Tapes" for example are protected until 2084.

Recordings made before 1963 are out of copyright in the EU, no matter what. Therefore the EU market is overflowing with unauthorized (but legal in the EU) releases of Dylan's first album and Dylan bootleg material from 1961 and 1962 (and classic Jazz and Rock & Roll recordings from the 1950s/early 1960s etc.). This means that Dylan's "1962 Anniversary Collection" proved to be superfluous legally (in the EU). But when it was released (in late 2012) the legal situation was unclear, since the new law had not been passed by the legislature of all EU member states (this process was finally completed in 2013). Therefore Sony/Dylan's people released it just in case.

*Note: The copyright for compositions is different: The actual compositions (written musical notes and lyrics) are protected for life of author + 70 years.

Most regular releases with Bob Dylan are available, but they are sorted a little differently in Spotify and Tidal. In additions its only fair to mention The Rolling Thunder Revue released in summer of 2019, which also only are available as a ten-track sampler.

In Spotify the releases are sorted into albums, singles and EPs, and compilation albums + an artist playlists listed as a separate category. Other albums that have a Bob Dylan-track are not available in Spotify, and one can only wonder why. Sadly the 30th Anniversary Concert Celebration Deluxe Edition (nor its original from 1993) isnt available in Spotify, as it was a semi-official Dylan-release  or, at least,  its on the album page on bobdylan.com (they both are).  One release which is NOT on Spotify is Biograph, a fact that to me is quite astonishing. This album is sort of mother to all later box-set dealing with the past of an artist  and in manys opinion both the prequel and starting point for all the later released The Bootleg Series installments. Its available, though, as an user-created playlist (by Brett Landis, to be precise).

In Tidal the categories are these:  albums,  compilation albums, live albums [or, directly translated concert albums], singles and EPs, playlists, and Videos. The 30th Anniversary  Concert Celebration Deluxe Edition release from 2014 are listed under participates on, with a number of other Dylan-related releases (such as soundtracks, tribute albums, and other,  mostly non-related Dylan, albums (which seem to be streaming releases only). One thing I noticed is that Dylan (from 1973) is listed under compilations , and that the 2007 Dylan compilation is not listed at all (same goes for Spotify, by the way). And, oddly, Biograph is listed under live albums  not under compilations, which one wouldve expected.

In iTunes  which is another matter (together with Google Play)  The Bootleg Series Vol. 14 - More Blood, More Tracks, The Bootleg Series Vol. 15 - Travelin' Thru 1967-1969 and The Rolling Thunder Revue: The 1975 Live Recordings are available in complete editions. The only release not available is the box-set with the 1966 tour, The 1966 Live Recordings. The career spanning multi-disc set The Complete Album Collection Vol. 1 is not available for download in iTunes, but the Japanese decades parts are (the 60s, 70s, 80s, and 90s/00s sets are sold separately , as well as albums individually within the decades sets). The latter set, 90s/00s, is not available as a whole, here the albums are sold separately within the set. MTV Unplugged is the US-version, and Tell Tale Signs from 2008 is the 28 track standard version (the double disc set + one track only available as download)  and not the 39 track Deluxe Edition [and with the Bonus Track a total of 40 tracks].

This page is an index to the pages on this site that give details of all international commercially-released regular stereo Bob Dylan albums released in the USA and available commercially today, as listed on the Albums page of bobdylan.com

These albums do not contain rarities or obscurities and are not eligible for the Searching For A Gem list. Nevertheless, their interest value or scarcity means they're worth listing here - as far as I know details of all international releases in all formats are not included on any other Internet site. I know from correspondence that many younger Dylan fans have never seen the original albums and their artwork, which is obviously much more impressive at the 12" size than when reduced to a 5" CD booklet (which often has minimal artwork anyway). Maybe these pages will spur people to seek out the original albums! Also, remember the guiding principle of Dylan collecting every copy of a Dylan album is different in some way from every other copy! This means that it is impossible to list every single variant of every release. Also, unless an album was purchased new from a record shop or from its original purchaser, there is no guarantee it is now in its original sleeve or inner sleeve  dealers mix and match to pair up a good quality record with a good quality sleeve, and they dont have the specialist artist knowledge needed to know when this is wrong. Several examples of this have been sent to me, not listed on the site.

These pages are still incomplete - if you have any entries to add to the list or additions/corrections to existing entries, please let me know!

Listings © 1998-2022
The rights to material from all quoted contributors remain with them.
Copyright of all included artwork remains with the various record companies and artists.