Video: "The Dark Side of the Road" - Questionable Releases
(title suggested by Sergio Mariano Romay) 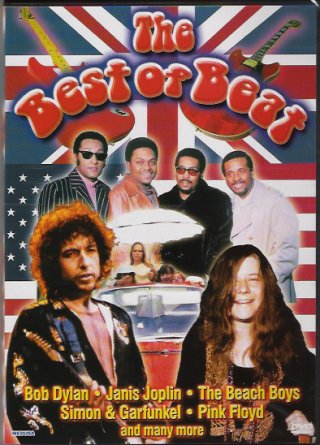 This is a page of VHS and DVD items formerly included in the main list which were or are being sold legally at the time in their own countries, but which have been challenged by contributors. I have therefore moved them here to this page. I've also added all the unauthorised DVD documentaries about Bob that have appeared in droves in the 2000s. I have only used an R- number where the performance on the questionable item is officially released elsewhere, performances exclusive to these questionable items now have their own Q- numbers. For Questionable audio releases, see here.

The first two songs on this video were recorded at the Arena Di Verona, Italy, on 28 May 1984, the remaining four on the following night, 29 May 1984.

HBO special from the 1986 Australian tour with Tom Petty and The Heartbreakers, recorded Sydney, Australia, 24 & 25 Feb 1986, broadcast 20 Jun 1986, also released on VHS and on laserdisc. For original VHS and laserdisc releases of this concert see VHS & DVD 1980s. Track listing:

The Glass Music release is a Region 0 NTSC DVD, which can be played in any DVD player worldwide that can convert NTSC signals. The DVD Total release is also NTSC, Regions 1 & 6 only.

Heartbreakers Live In Australia is the Hard To Handle video on DVD with Dolby Digital 5.1 sound. As far as I know this is its first appearance on DVD, but its legality anywhere else in the world is questionable. The artwork is from the 1984 Real Live album!

Thanks to Dag Braathen for notifying me of this item on eBay and to Keith Venturoni for the scan. Thanks to Alexandre Froemming from Brazil for information about a different Brazilian DVD release which came with a magazine called "DVD Total", now using the Hard To Handle title and artwork. Thanks to Paul Ryan for informing me that www.amazon.com have on sale a version of this DVD just called Live - Australia from Phantom Sound & Vision (no picture available) which is listed as Region 1 only. This is also apparently sourced from Brazil. I find the fact that they're selling it surprising, as I'm sure that in the USA it is regarded as pirated. Thanks also to Ian Woodward for information that a Brazilian-sourced DVD of Hard To Handle is being sold in Japan - it could be the "DVD Total" version shown here.

Thanks also to Alexandre for copies of these two Brazilian DVDs! Thanks to Jean-Pol Hiernaux for scans of a 2003 South Korean DVD release being sold on www.amazon.com, the studio is apparently "Best Album 1 ****". As there is some Portuguese text on the packaging as well as Korean, it's possible the DVD is sourced from the Brazilian release also called Heartbreakers Live In Australia.

Tracks as listed on the insert are:

Thanks to Alexandre Froemming for the copy of the DVD.

Another unauthorised DVD being sold by www.amazon.co.uk! The performances are.

Tracks 1-3: Blowin' In The Wind; Man Of Constant Sorrow; The Ballad Of Hollis Brown - Westinghouse 1963 (introduced by John Henry Faulk)

Tracks 7-9: Gotta Serve Somebody; I Believe In You; When You Gonna Wake Up? - Saturday Night Live 1979

Thanks to Ian Woodward and Franck Faugere for information.

This DVD release promised "rare live footage" although nothing is new to Dylan collectors. The title has now been changed to Bob Dylan - Changing Tracks and the picture of the album has been omitted from the front! I originally thought this was from a documentary broadcast on UK TV in a series called "Rock Milestones" but there's no mention of it in the text. Prominent British Dylan fans such as Andy Gill, Clinton Heylin and Andrew Muir contribute to the programme. The DVD contains these performances:

Thanks to Gil Walker for information about this item. For The Folk Years, see below,

Highway 61 Revisited; Fixin' to Die; Man Of Constant Sorrow; When The Ship Comes In; Only A Pawn In Their Game, Blowin' In The Wind; Talkin' Worlds War II Blues; A Hard Rain's Gonna Fall; The Times They Are A-Changin'; The Ballad Of Hollis Brown; All I Really Want To Do; Mr. Tambourine Man; It's All Over Now, Baby Blue; Like A Rolling Stone; Ballad Of A Thin Man; All Along The Watchtower; Tangled Up In Blue; Idiot Wind; Simple Twist of Fate; Hurricane; Gotta Serve Somebody; Just Like A Woman.

Thanks to Jean-Pol Hiernaux for information and scans.

The tracklisting is as follows:

Thanks to Harold Lepidus for information and Philip van Dijk for scans.

There is also a 5DVD set from Classic Rock called The Essential Dylan that includes The 30th Anniversary Concert Celebration, but I assume this is of the same quality. Thanks for Bill Hester for finding a 2009 European DVD called Tribute To Dylan from Immortal/Zoom/101 Distribution. This appears to have the complete concert but is still probably from a VHS source. Thanks to Manuel García Jara for finding what purports to be a Sony 2DVD release on eBay - Hans Seegers says this is also definitely pirated, probably from the VHS or laserdisc release.

*= On the cover the song is called “It Takes A Lot To Laugh”.

The opening title of the DVD : “Today’s Music Concept presents Stars on Stage: BOB DYLAN Knockin' On Heaven's Door" There is also, from the Menu, a biography on Bob Dylan, which is updated up to 1997. The DVD lacks end titles, such as producers and year of making.

Thanks to Harald Sigvartsen for information and scans.

Listings © 1998-2020
The rights to material from all quoted contributors remain with them. Copyright of all included artwork remains with the various record companies.